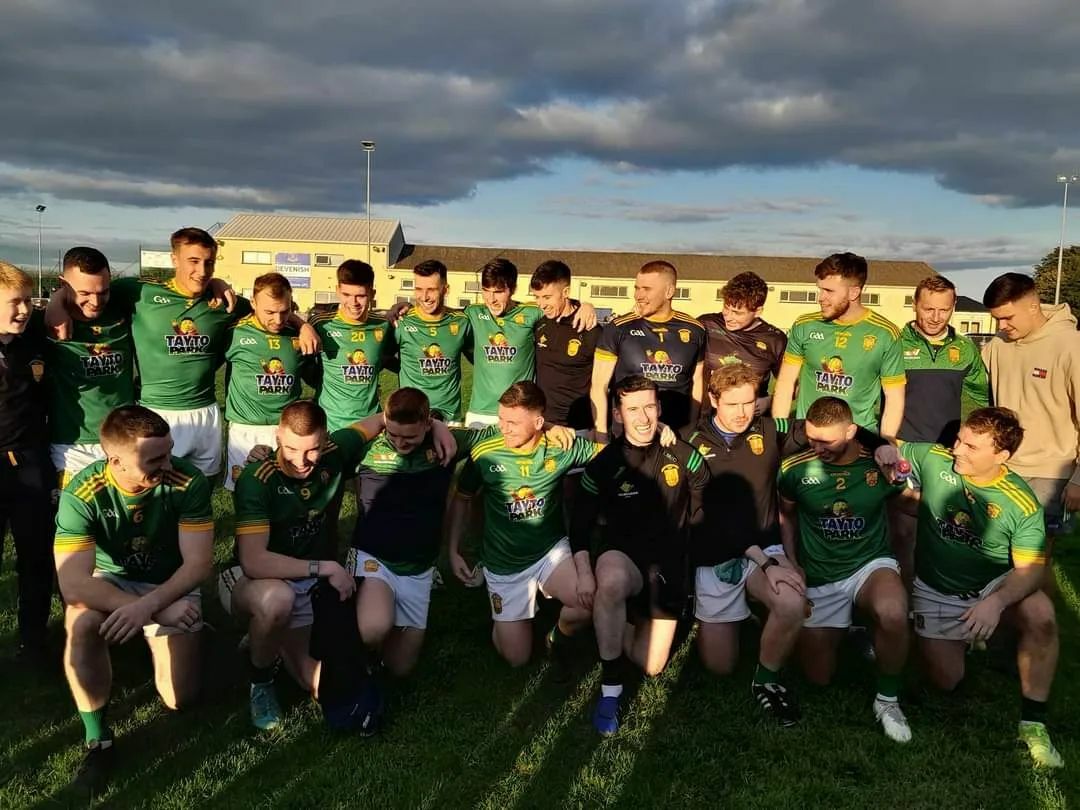 Curraha travelled to Seneschalstown on Saturday evening to take on St. Colmcilles in this Senior Championship relegation playoff. Unlike the recent trip here to face Navan O'Mahonys, this was a perfect evening for football and the two sides served up a hugely entertaining contest that was in the balance until the very end.

St.Colmcilles made the better start and registered the first 4 scores of the game, as Curraha struggled to deal with the quick direct ball into the 'Cilles full forward line. However, just as they threatened to pull away early on, Curraha were back in the game courtesy of a goal from Diarmuid Moriarty following a move involving Niall McLarnon, Jack O'Connor and James McEntee. Conor Moriarty levelled the scores in the 10th minute with a free after a driving run from Niall Murphy saw him being pulled down. Cilles pulled ahead with a point from play from James Conlon, with Gavin Coyle responding with a fine point from play after a link up down the right hand side between Murphy and O'Connor who were both causing trouble for the opposition defence with their runs from deep. Conor Moriarty displayed his Kerry roots shortly after with a Clifford style leap and catch for a mark just inside the 45 after a long ball in was underhit. His left footed strike pushed Curraha in front for the first time. Jack O'Connor extended the lead to 2 soon after after Luke McCarthy in the Curraha goal had done well to deal with a long ball in and launch an attack. Cilles went straight up the other end and popped over a point to leave the minimum between the sides after 15 minutes. Conor Moriarty fired over a free from the right-hand side after 28 minutes after Ciaran O'Hanranhan threatened to break through on goal and was hauled down. St.Comcilles had a purple patch following this to go back in the lead, registering the next 4 points through Conlon and David Bell. Ciaran O'Hanrahan scored from the right side in the 25th minute following a brilliant catch from McLarnon who quickly found Podge O'Hanrahan who setup his brother to fire over. A Bell free-kick for the opposition completed the scoring, leaving St.Colmcilles ahead at the break, 0-11 to 1-6.

Curraha started the second half brilliantly. McLarnon secured possesion from the throw in, found Conor Moriarty and the white flag was raised after only 20 seconds. Moriarty registered the next score after 8 minutes to level the scores, firing over left footed from the right hand side, after Diarmuid Moriarty had been fouled. Bell responded with a free at the other end before Jack O'Connor scored following a brilliant interchange involving Brian Joyce and Ciaran O'Hanrahan. Conlon scored from play for Cilles soon after with the game being very open and end-to-end at this point. Diarmuid Moriarty levelled matters again in the 13th minute of the 2nd half, Gavin Coyle volleying a loose ball directly to McLarnon who played a long accurate ball into Moriarty to score on the half-turn. He was on target again 2 minutes later, after a sharp move between O'Connor and McEntee. Curraha were well on top at this point, dominating around the middle on both kick outs and crucially, stopping the supply line in to Colmcilles full forward line. Credit to the players and management for the adjustments at half-time, with great performances from the full back line in the 2nd half, and Neil Shortall who mopped up a huge amount of loose ball. #

An O'Connor point from out on the left after good work from Mcentee and Coyle pushed Curraha 2 points ahead with with 12 minutes to play. Conor Moriarty made it 3 points with 7 minutes to go with free after he was fouled after gathering a ball in from Dairmuid Moriarty. McEntee fired over an outstanding free from distance over on the left touchline after more great work from McLarnon. Conlon reduced the gap back to 3 in the 25th minute to leave a goal between the sides and setup a tense finale. As Comcilles threw all they had at finding a way through, the Curraha defence stood tall and kept them at bay. The work rate throughout the team was immense, with some outstanding block and turnovers launching a couple of counter attacks were they spurned the opportunity to kill the game. However, they held their nerve in defence, the best example coming from substitute Ian Battersby's first touch as he flicked the ball off the ground into his hands in front of his own goals and soloed out of defence to relieve the pressure.

Despite 5 minutes of injury time being played, Curraha held firm and ran out the winners of an excellent game, winning 1-14 to 0-14. An outstanding display from the lads who showed real grit and team spirit, accompanied by some excellent attacking displays. There was a huge number of blocks and turnovers in the second half as Curraha outworked the opposition and refused to be beaten. After a number of good performances went unrewarded this season with close defeats and draws earlier in the year, it was great to see the hard work of all involved pay off.

Credit too all involved throughout the panel and the management team of for pulling of an excellent result and securing Senior status for the club for 2023.