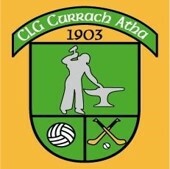 Curraha travelled to Dunsany for their second game in Group of the Senior Football Championship, against reigning Intermediate champions Trim.

There was a cagey opening few minutes as both sides struggled to come handle the greasy conditions underfoot as the weather turned soon before throw in. The sides were leave at 2 points apiece after 9 minutes, with Diarmuid Moriarty and James McEntee on target for Curraha. Trim added another 3 points, quickly followed by a goal in the 15th minute to leave a 6-point gap between the teams. Curraha's task was made all the harder soon after when the referee produced a red card for Jack O'Connor. Trim capitalised almost immediately as they registered their second goal of the game, followed by a further 3 points before half time, with Moriarty registering a further score for Curraha to leaven them trailing 2-8 to 0-3 at half time.

The second half followed a similar pattern, with the extra man advantage for Trim ruling out any chance of a comeback form Curraha. Moriarty and McEntee both got their second scores of the game, but Trim were in control throughout and ran out comfortable winners.

Next up for Curraha is the final group game against Navan O'Mahonys in Seneschalstown on Saturday September 3rd.