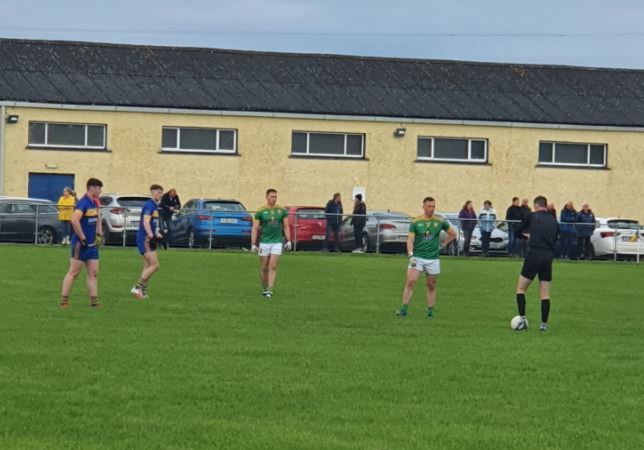 Following their first win of the campaign in their last outing, Curraha travelled to Seneschalstown hoping to build on that success. Torrential rain throughout the day left the pitch quite heavy and greasy, but thankfully the sun had come back out in time for the 7.30pm throw-in.

Curraha pressed early on and spurned a couple of chances, before James McEntee knocked over a right footed free from a tight angle out near the right sideline. The hosts registered the next 2 scores of the game, with Eoin Finnegan converting from a mark and a free within a minute of each other.

Seamus Hogan levelled the game in the 10th minute with a long-range left footed effort following a clever quick free from Niall McLarnon, and Hogan followed this up almost immediately after an excellent Neil Shortall turnover and break by Ciaran O'Hanrahan. Finnegan responded for the hosts with a point from in the 13th minute, and another mark in the 15th to leave his side ahead by a point midway through the 1st half. Soon after, Curraha were awarded a penalty. An excellent team move saw Shortall bear down on goal and as he prepared to shoot, he was dragged down from behind. McEntee stepped up and calmly converted the penalty to the corner of the net.

Brian Joyce extended Curraha's lead soon after when a McEntee free dropped short and was brilliantly recycled by Sean Keogh. Tom McDonnell popped one over for the hosts soon after to keep them in contention. Neil Shortall got the Ha's next score following a good catch and layoff from Andrew Coyle on the 40, and Shortall registered another soon after, this time a lovely left footed effort from the left-hand side that curled just inside the post. A late Finnegan free for the hosts deep into injury time left Curraha ahead by 3 points at the break, 1-06 to 0-6.

Seneschalstown got off to a flyer in the second half, scoring 1-04 in the first 10 minutes of action to push them into the lead. Curraha responded well and almost had another goal of their own, as Conor Moriarty forced their keeper into an excellent save. McEntee fired over a 45, Sean Keogh registered his first of the day following a great move involving Luke Farrell, Ciaran O'Hanrahan and Oisin Fay. McEntee then fired over another free to reduce the deficit to 1 point again.

A converted 45 by Sean Commons eased the nerves for the home side as Curraha were beginning to get back on top at this point and they quickly followed this up with a point from play by Jack Owens. Mcentee converted another Curraha free, with Keating and Finnegan responding for the hosts. Curraha pressed hard later on but with the home side happy to concede frees in non-threatening areas, struggled to make the breakthrough. Sean Keogh had a glimpse of goal but a difficult chance was well saved by the keeper. McEntee hammered a late close range free just over the bar, and the last score of the game went to the hosts full forward Finnegan.

Curraha have 2 remaining games in the league. Next up is Trim in Joe McDermott Park, with a short trip to Dunshaughlin to finish up the league campaign.