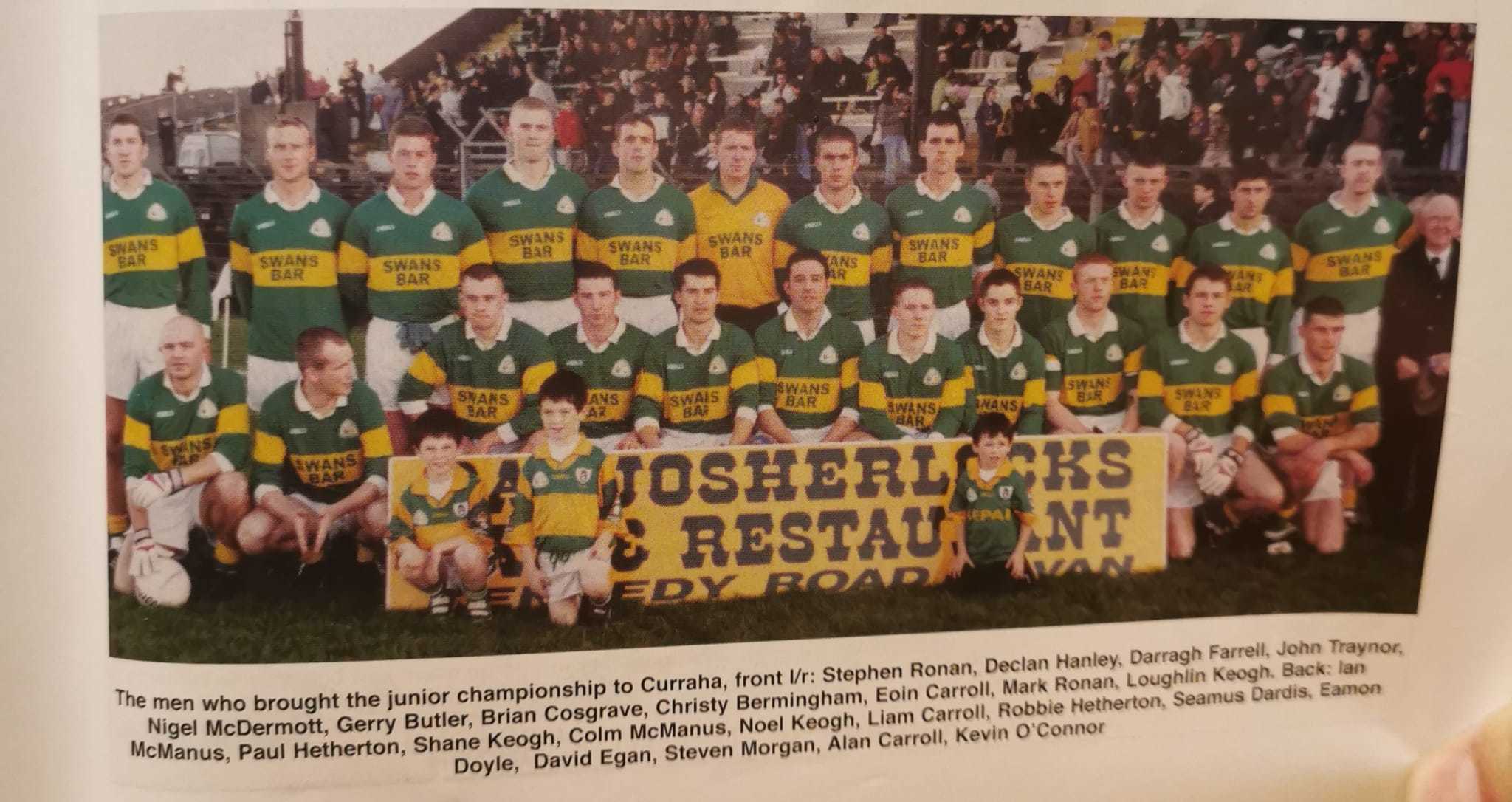 With the County finals played over the weekend, it seems like a good time to look back on Curraha's Junior Championship success 20 years ago. Some very fresh faces in the team photo from the day. Brian Cosgrave and Declan Hanley were still active with the 2nd team this year so have definitely earned 'Veteran' status at this stage.

See below for the match report from Hogan Stand on the victory from 2001.

Making the most of your resources is what every club strives to achieve. In this respect, the gaels of Curraha set the standard in 2001 by maximising their potential and winning the junior football championship title. We look back on their campaign. The vim and vigour of championship football hasn't always extricated the best from the Curraha camp. Who says so? Certainly in winning the 2001 junior football championship, the perennial triers turned that notion on its head in emphatic fashion. While Curraha may not have been fated to win the competition, they undoubtedly proved the best of a determined bunch in securing the county's third most prized piece of silverware with a meritorious win over Wolfe Tones in the county decider at the tail-end of October. Earlier in the year Curraha had given us a hint of their intent. Over the course of their travails in the group section, the champions-elect demonstrated outward signs of an increasing maturity and that, coupled with fire in their bellies, augured well for their championship challenge. Fact is, Curraha needed to produce quality performances close to their optimum ability as in the likes of St. Michael's, Bective and Dunderry, they had opponents with a proven pedigree in the competition and undoubted potential to boot. The shuffling of the pack in the group quickly identified Curraha however as likely contenders for the title. Curraha's confidence was fired-up right from their opening salvo in the group when they engineered a two point (1-9 to 1-7) victory over a vaunted Bective side.

As things transpired, that opening win paved the way for things to just get better and better for the would-be champions. A resounding 1-13 to 1-4 victory over Simonstown in round two suggested that Curraha had the firepower to match their mean streak at the back. Thereafter, the would-be champions looked more like a team meaning business and their 1-15 to 2-2 win over Bellewstown in the third round had their opponents sitting up and taking notice for really the first time in the campaign. Curraha's momentum was maintained in their next outing against Dunderry in which they nevertheless had to work hard to secure a 1-9 to 1-4 victory which guaranteed them a quarter final place. In their final group, a 3-10 to 0-13 win over St. Michael's added to hopes within the Curraha camp that a title win was indeed in the offing. In the quarter-final, Curraha came up against a vaunted Dunboyne side but yet played some of their best football of the campaign to run out exciting 3-10 to 0-8 winners. The semi-final saw the winners-elect come up against Nobber. It was to take two games to separate the teams after the sides were locked at 1-9 apiece in the first game. In the replay in Navan, there was again nothing to separate the sides but a well-worked goal proved decisive as they secured a hard-fought 1-10 to 0-11 win. And so to the final and a meeting with a Wolfe Tones team which similarly impressed en route to the decider, having emerged from their group courtesy of some tremendous victories over the likes of Nobber, Ratoath and Gaeil Colmcille.

However those who tipped Curraha for the title pointed out that Wolfe Tones made very heavy work of disposing of the challenge of Meath Hill in the penultimate round. In that game, the Tones recorded 19 wides over the course of their two point win. However, Curraha knew they too had to become more efficient in front of goal if they were to lift the cup. They fired 11 wides in the drawn game with Nobber and it needed a tremendous rally by them late in the replay to eventually secure a place in the final. Thus, in the run-up to the county final, most observers reckoned that the destination of the spoils hinged on which side would be less prolifigate in front of goal. As things transpired, there was to be no separating the sides, first time out. Wolfe Tones looked the more likely winner over the hour although Curraha had their chances of victory late on. The game was most notable for Curraha's conversion of two quite brilliant goals, one either side of the half-time break. In addition to their goals, the winners-elect had a trump card also in 'keeper Liam Carroll who made some brilliant saves to deny Wolfe Tones a goal. In truth, the final score which read Wolfe Tones 0-10, Curraha 2-4 fairly reflected the exchanges at Pairc Tailteann on the day. Curraha had to play second fiddle to their opponents in the early stages of the match and after barely a quarter of the game played, trailed by 0-1 to 0-4, their solitary point coming from the boot of Alan Carroll. Curraha were to go four behind before getting through for their first goal, a splendid effort by Colm McManus after good spade work by Ian McManus, Brian Cosgrave and Shane Keogh. Curraha now enjoyed a purple spell and a converted free by Ian McManus and another point by Colm McManus suddenly saw the champions-elect leap into a 1-3 to 0-5 lead with 22 minutes of the match played. Wolfe Tones came back into the game as the match progressed though and they pointed again to leave the sides level at the break, 1-3 to 0-6. Wolfe Tones started the more sprightly on the resumption and Liam Carroll needed to be at his best to deny Fox of the Tones an early goal. Both sides exchanged points before Curraha broke through for another splendid goal when Colm McManus delivered a long pass to Eoin Carroll who promptly released his midfielder Seamus Dardis who finished brilliantly to the net to catapult his side into a 2-4 to 0-8 lead. Both sides put their head down and went for broke, each having chances in the final quarter. For Curraha, goalkeeper Carroll was an inspiration once again when he denied Kevin McKeever a goal. Carroll was immediately on hand thereafter to deny Tones' McGrath. Eventually Tones' Power drew his side level 11 minutes from the death. Although chances were created in front of goal by both sides during the remaining passages of play, none of them were seized upon leaving the final score, Curraha 2-4 Wolfe Tones 0-10.

Fortunately for all concerned with the fortunes of Curraha GFC, the Matthew Ginnity Cup did eventually head south. Brian Stafford's charges' subsequent 1-13 to 1-6 win over Wolfe Tones in the replay at Pairc Tailteann at the end of October kick-started appropriate celebrations. It was a time to rejoice and celebrate a fine ending to a long and 'oftimes difficult campaign. Curraha made no mistake second time around. The evidence would show that it was Wolfe Tones who 'missed the boat' in the drawn game. In a fine all-round team performance, team-captain Gerry Butler's display was redolent of the 'cometh the hour, cometh the man' mantra as the right full forward shot 1-3 in a brilliant 12 minute spell which saw the game swing decisively in Curraha's favour. In a game which goals were always going to be of vital significance, Butler's goal in the 42nd minute helped form a launching pad for Curraha to go on and lift the title. It was the Tones though who actually started the game like champions-elect, racing into a 0-2 to 0-0 lead inside the opening four minutes. A point however from Eoin Carroll boosted Curraha morale but their opponents held firm and retained a 0-4 to 0-1 lead by the end of the first quarter as the early sparing continued unabated. It was tit for tat from there to the 25th minute before Curraha finished the half in style with points from Shane Keogh and Eoin Carroll leaving the sides sharing ten points at the interval. Like true champions though, Curraha rolled up their sleeves in emphatic fashion when the most difficult questions began to be asked. Had they got the resolve, the necessary ambition and, ultimately, the ability to go the distance? Each and every question was answered in the affirmative. Curraha proceeded to grab the game by the scruff of the neck after the resumption and Wolfe Tones simply had no answer to the resurgent Curraha lads. The winners' team play was a joy to behold in the second half and when Man of the Match Eoin Carroll edged them into a one point lead four minutes into the second half, slowly but surely a cloak of inevitability wafted over proceedings. It was all too predictable thereafter once the aforementioned Carroll brilliantly flicked on a long delivery for captain Butler to fire, soccer-style, past the Wolfe Tones 'keeper. Curraha were now 1-6 to 0-5 to the good and although Wolfe Tones added their only point of the second half, it had consolation written all over it as their opponents quickly re-asserted themselves all over the pitch. Alan Carroll neatly made it 1-7 to 0-6 before the aforementioned Butler struck gold again following a quick bit of thinking by Ian McManus. Thereafter two more points from Gerry Butler and a fine effort by Shane Keogh made it 1-11 to 0-6. It was all over bar the shouting by that stage. To their credit, Wolfe Tones never looked like throwing in the towel and although their hopes were briefly revived when Niall McLoughlin scored a fine goal, Curraha replied by putting the icing on the cake with a brace of points by Alan Carroll. The final scoreline of 1-13 to 1-6 said it all.

A Chairde,We are currently looking at options for the cl...

Curraha U13 girls felt the pain and heartache of defeat a...

Further to representations from a concerned parent and g...

There has been some interest from a number of people inv...

The club has placed great emphasis on developing our juve...

Curraha/St Vincent’s came out the eventual winners in thi...