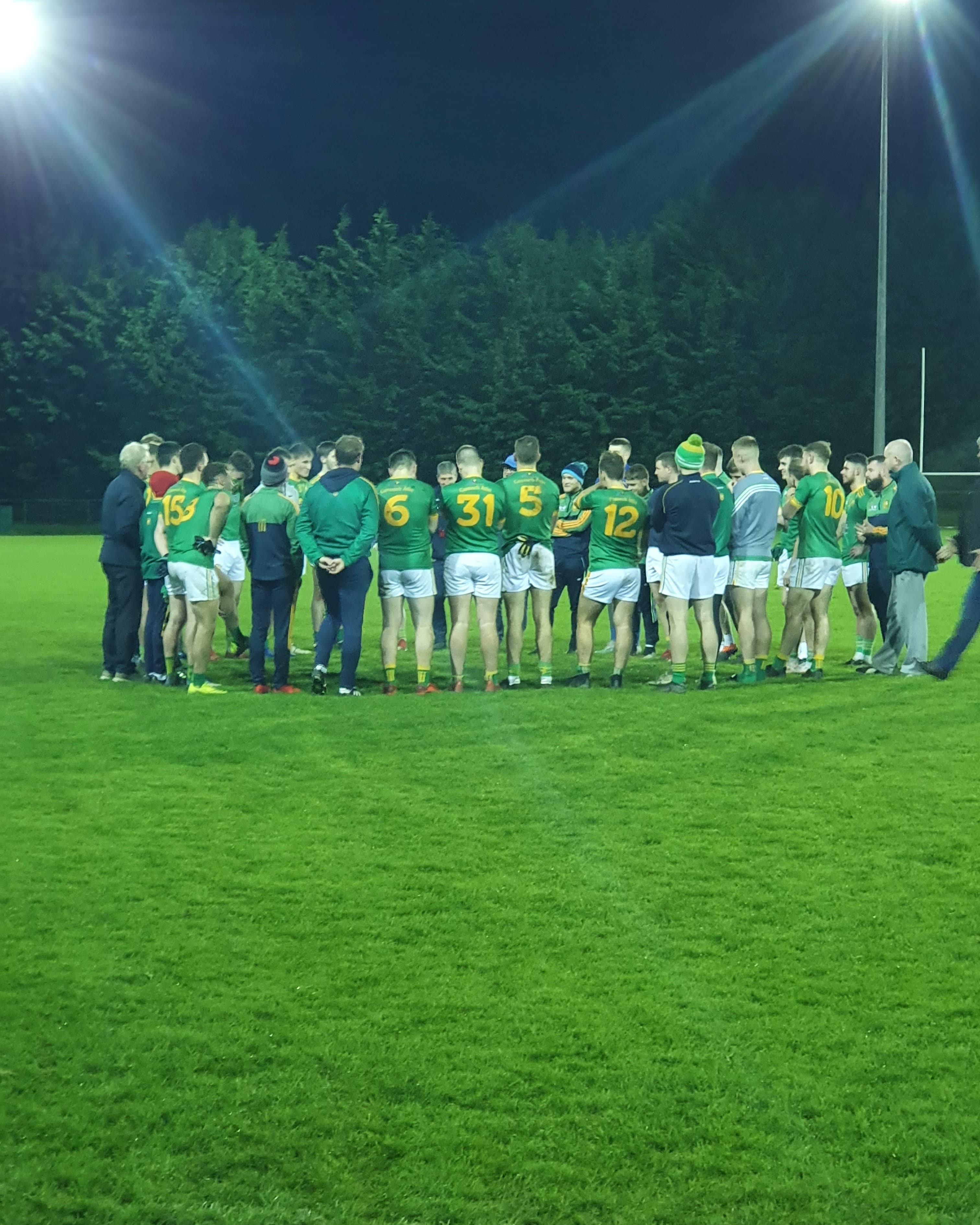 Curraha traveled to Skryne to face one of the traditional powerhouses of Meath football in this Senior Football Championship Relegation Playoff. On a perfect evening for football, an outstanding team performance saw the ‘Ha emerge victorious, with a three-point win after a hugely entertaining game.

With the majority of the panel fit and available bar a couple of injuries, and complimented by the returning trio of David Toner, Brian Murphy and Sean O’Hanrahan, Curraha were able to name a very strong squad. They set the tone right from the throw in with a huge catch and run from Brian Murphy setting up Diarmuid Moriarty for the first score of the game inside the opening 20 seconds.

This was added to almost immediately with a Jack O’Connor free. O’Mahonys responded well, kicking the next 4 scores before a Diarmuid Moriarty point from play after 13 minutes and a Ciaran O’Hanrahan effort on 17 left the sides level at 4 points apiece at the water break. O’Mahonys had plenty of possession in this opening quarter without creating many clear scoring opportunities. Curraha were always a threat on the counter and their direct running threatened to open up the O’Mahonys defence on a number of occasions, including a fine save from the keeper as Jack O’Connor broke through.

A Conor Moriarty point straight after the restart nudged Curraha back in front, with Diarmuid Moriarty kicking his third of the day soon after to extend the lead to two. An O’Mahony’s free reduced the gap to the minimum before a fine effort from Gavin Coyle pushed Curraha further in front. Brian Murphy drew another good save from the keeper as Curraha again broke through the defensive ranks. Another point for Jack O’Connor on the stroke of half time left Curraha ahead by 3 points at the break, 0-8 to 0-5.

O’Mahonys worked their way back into the game in the 3rd quarter as Curraha struggled to get back into their rhythm after the half time break. A couple of Curraha wides were punished as O’Mahonys scored the next 3 points to bring the sides level at the water break. Curraha were awarded a penalty before the equalising score which the O’Mahonys keeper saved well. It was the keepers foul that led to the penalty, deliberately fouling Gavin Coyle as he was about to shoot into an empty net.

It took Curraha 24 minutes of the second half to register their first score. Credit must go to the lads for the brilliant defensive work that prevented O’Mahonys from gaining a lead at this point. Great defensive shape and organisation, along with some intense pressing and turnovers was testament to attitude of the lads on the night. Diarmuid Moriarty put the ‘Ha back in front, but this was cancelled out almost immediately by O’Mahonys to leave the scores at 9pts each with 5 minutes to go. Luke McCarthy also produced an outstanding save in this period to prevent O’Mahonys pulling ahead.

From here, Curraha’s determination and work rate was immense. They were first to every ball and were dominating their opponents in the tackle. Diarmuid Moriarty kicked an absolute clutch score from distance with 2 minutes remaining and the ‘Ha were almost there. Niall Murphy, who had put in some huge hits and turnovers, popped up at the other end following a great team move and fisted over, before Jack O’Connor put three between the sides with a long range left footed effort that curled inside the post. The final whistle blew soon after, with Curraha securing Senior status with a three-point win. Curraha 0-12 Navan O’Mahonys 0-9

A great win for the ‘Ha after what has been a difficult year. There was a big performance waiting to happen over the last few weeks with players returning to fitness and some of the lads from abroad available. The teamwork and attitude were great to see in this performance, with the refusal to let O’Mahonys gain control at any stage a huge credit to all involved. Senior status is secured, and they can now look forward to 2022.