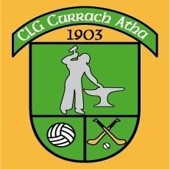 Curraha welcomed Moynalvey to Joe McDermott Park on Wednesday evening for their fifth game of the Feis Cup. On a perfect evening for football, the 2 sides produced a very entertaining game that was in the balance until the last quarter.

Curraha started well, registering the opening 2 scores of the game, the first from a Sean Keogh free and then a fine individual effort from Niall McLarnon, after a strong run through the centre. Moynalvey got on the board after 5 minutes, with Neil Shortall responding with a fine point from a tight angle.

The visitors started to gain a foothold in the game at this point, and registered the next 5 points, before a free and an excellent point from play from Sean Keogh brought Curraha back into the game. Moynalvey managed 3 more points before half time, with Brian Joyce kicking a fine long range effort just before half time for the 'Ha. Unfortunately this would be his last involvement in the game as he was forced off with a knock at half time.

A Sean Keogh free reduced the gap to 3 at the start of the second half, with the visitors responding with a free of their own soon after. The game was very much in the balance at this point, and with both sides missing chances, it was 14 minutes until the next score with Sean Keogh firing over another free. The visitors did however get on top in the final quarter, with a goal in the 20th minute opening up a comfortable gap for them. Gavin Coyle scored a nice point from play, and Keogh scored a late free to keep the scoreboard ticking over, but Moynalvey were able to close the game out for a 9 point win.