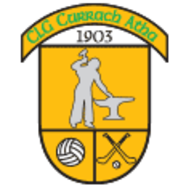 Curraha produced a much improved performance from last week when they hosted last years beaten Keegan Cup finalists. Still short of a number of players, the lads raised their game considerably and the result was very much in the balance until the final few minutes.

Curraha were unlucky to lose Niall McLarnon to a black card after only 3 minutes, with the resulting penalty coming back off the crossbar. The Kells outfit opened the scoring with a point soon after, before Ben Heagney finished smartly to the net after great work from Neil Shortall and James McEntee.

Gaeil Colmcille responded with a couple of quickfire points, before a James McEntee free in the 11th minute put Curraha back in front. Gaeil Colmcille pushed on after the water break and opened up a lead , before another couple of points from James Mcentee kept Curraha within reach, but a goal and a point late in the half for the visitors left Curraha trailing by 5 points at half time.

Curraha started the second half brilliantly with 2 points each for James McEntee and substitute Conor Moriarty before the water break. With the lead reduced to just 3 points at one stage, Curraha continued to press to try and find a way back into the game, but the Kells defence was well organised and managed to keep Curraha at bay. This included an excellent save from their keeper to prevent a goal after a well worked Curraha move.

Conor Moriarty got his 3rd point of the game to keep the scoreboard ticking over, but it was the Kells side who finished the stronger, adding 3 points in injury time to put a bit of a gloss on the scoreline. This was a tight game throughout, and certainly closer then the final score might suggest. Andrew Coyle, James McEntee and Niall Murphy were all excellent for Curraha, and a number of the younger panel members got some much needed game time.

Next up for Curraha is the short trip to face Donaghmore/Ashbourne next Wednesday evening.